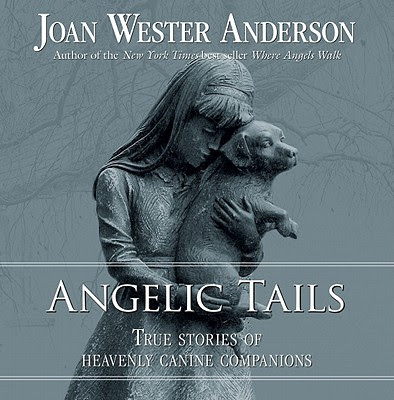 Joan Wester Anderson, who has written several best-selling books on angels and miracles, was inspired to write “Angelic Tails: True Stories of Heavenly Canine Companions” after reading the story of St. John Bosco and his guardian angel “Grigio” – a huge grey dog that protected him for 30 years and never aged. In her research for her other books, she had come across many stories of dogs acting in “angelic” ways, but she regarded them with a healthy skepticism. She states that she came to realize that “the journey on earth is difficult at times, so our loving Father has provided many helpers for us. Friends, special teachers, gentle companions, and more. Some may not fit the traditional mold. But a furry embrace and a cold nose work just as well.”

The stories in these pages truly bear witness to the idea that God uses dogs to help us. One dog alerted it’s family to a fire that was about to start in an electrical outlet. Another appeared at a house and stood guard the very night that an escaped killer decided to camp out on their property. A lost toddler was saved because the family dog refused to leave her side. Still another guided a neighbor family safely home through a blizzard.

Our canine companions bring us love and devotion and companionship. It is possible that in times of need, they may also save our lives. After reading this book, you will never look at a dog in the same way.