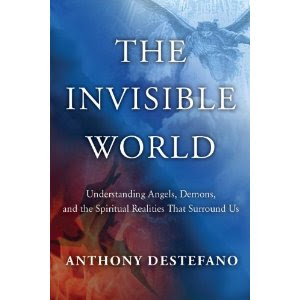 The Invisible World: Understanding Angels, Demons, and the Spiritual Realities That Surround Us

In writing “The Invisible World- Understanding Angels, Demons, and the Spiritual Realities that Surround Us,” Anthony Destefano sought to “try to make the invisible realities that surround us just a little more visible.” To do so, he stays away from the anecdotes so common in most books about angels, demons, and the life after this one. Instead, he relies on “solid theology, informed by common sense and logic, and backed up by Biblical scholarship and the universal teaching of the Christian Church over the past two thousand years.” This is what makes this work such a valuable resource.

Destefano explores the role of angels and demons and why they continue to battle over our souls. Demons want desperately to hurt God, but they can’t hurt God Himself. Therefore, they instead try to “hurt that which bears the image of God. . . In other words, you do everything you can to hurt those miserable, fallen, and inferior creatures known as human beings. . . If the demons can persuade us to turn against God, that represents the only ‘victory’ they can ever achieve against the one whom they despise so much.” The angels, on the other hand, are there to help us. They “have a mission to accomplish – our ultimate salvation – and that’s what they spend their time focusing on.”

Destefano also examines the importance of free will and the choices we make. He also emphasizes the importance of putting God first in our lives. Even good things can be held up as idols. “If God is anything but number one in your life, then your priorities are screwed up – period. Knowing that, the devil’s primary objective is always to get you to set up ‘false idols,’ and thereby relegate God to the number two position in your life . . . or even better, get him off the list completely.”
The importance of pain and suffering and the incredible power of grace in our lives are also discussed in depth. Heaven and hell, personal and final judgment are also discussed.

Destefano is Catholic, but aims his books at a wider Christian audience. In his own words, “I try to take the CS Lewis approach, and write books which focus on those beliefs all Christians have in common.” Therefore, he does speak about the importance of God’s forgiveness but does not discuss the Sacrament of Reconciliation. In the same vein, his discussion of heaven and hell includes no mention of Purgatory. He does, however, encourage the very Catholic practice of “offering pain up” in order to help others.

He largely aims his books at those who are not currently practicing their Christian faith in the hopes of encouraging them to return. This being noted, “The Invisible World” is also of great value to committed Christians and Catholics. It will help you set priorities in your life and focus on eternal , rather than solely temporal realities. It will help you understand the importance of the decisions you make, and hopefully make better decisions as a result.